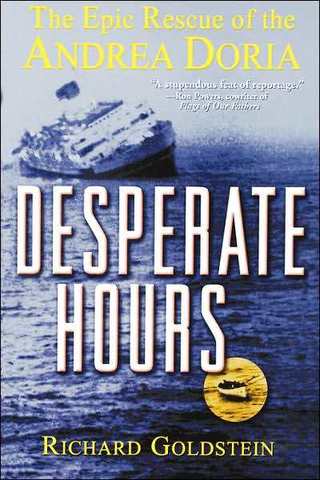 DESPERATE HOURS: THE EPIC RESCUE OF THE ANDREA DORIA

Journalist Goldstein (Mine Eyes Have Seen, 1997) offers the definitive history of the Doria's sinking and the rescue of 1,700 people. …. Goldstein has interviewed a mass of participants and experts. The result: a detailed and authoritative history ranging from the background of the liners and the technical details of ship construction and transatlantic navigation to a gripping account of the collision, rescue, and aftermath.

Goldstein’s book is packed with detail … His description of the Doria’s sinking is especially moving.

Excerpt on the French liner Ile de France coming to the rescue of the Andrea Doria’s passengers:

Raoul De Beaudean, the captain of the Ile de France, had been praying silently for the fog to lift as he approached the collision scene. He considered radioing the rescue ships already there to ask about visibility in the area but decided he had used the airways enough. And then, at about 1:35 A.M., one of his officers saw the expected echoes on the radar screen – straight ahead, 12 miles away. Four pips, representing four ships, were glowing. De Beaudean imagined what the search would be like if the fog remained dense – a careful approach to the nearest pip, then slow movement from one pip to the next, trying to identify the one that represented the Andrea Doria.

Then came a shout. "It’s lifting. The fog is lifting, Captain. We can see the lights."

De Beaudean moved to the bridge. He had expected to be groping blindly, but now he saw a cluster of lights some 6 miles off. The fog was indeed thinning, a breeze arriving from the south and sweeping it away.

The Ile turned on its searchlights, and soon afterward the captain ordered: "Announce the distance."

"Half speed," De Beaudean directed, remembering that the Ile was still speeding at 22 knots.

The captain moved the Ile slightly right to get a better view of what he believed was a rescue ship. Its navigation lights were shining and it flashed its searchlights at the Ile, momentarily blinding the men on the liner’s bridge. It was the Cape Ann.

De Beaudean ordered the Ile to move forward slowly, trying to get as close as he could to lighten the task of the men who would be rowing to the Doria. When the Ile reached a point a mile and a half away, her engines stopped. The liner glided forward on her momentum, and then De Beaudean ordered, "Reverse all engines slowly."

The crew now heard a confusing din – cries for help from the Doria’s deck.

De Beaudean stopped the Ile 400 yards away, its bulk serving as a windbreak to keep the open water between the ships calm.

And then the captain issued an order that stirred the spirits of hundreds who had been stranded for 2 ½ hours, watching helplessly as their beautiful ship tilted and tilted, closer and closer to the end. It was an order that produced an image to be marked indelibly on the consciousness of all who glimpsed it for the rest of their lives.

"Light up our name, the funnels, the decks. Light up everything, quickly."

Switches clicked, and the block letters ILE DE FRANCE – aligned between the two red and black funnels – blazed through a North Atlantic night that only moments earlier had shed an impenetrable and deadly fog.

And then from the captain, a second order: "Launch the lifeboats."

The crewmen worked the winches that sent eleven boats – five from one side of the Ile’s hull and six from the other side – splashing into the sea. The sailors took their spots at the oar locks, and they began to row.

On the deck of the Andrea Doria, David Hollyer found the French liner’s legend in lights mesmerizing, the playing of floodlights on bobbing lifeboats worthy of a Hollywood spectacular. "This is like a Cecil B. DeMille production," he thought.

To Istvan Rabovsky, the Ile’s lights "were like a Christmas tree."

Istvan’s wife and ballet partner became transfixed by the lights from the heavens, the stars and the moon having appeared with the lifting of the fog. Nova Kovach concluded: "This is nature’s miracle."

Jerry Reinert was seized with "incredible joy" when the Ile announced herself in a glow. "It was almost as if the sky lit up," he would remember. "It meant, hey, we’re gonna live."

HELLUVA TOWN: THE STORY OF NEW YORK CITY DURING WORLD WAR II
Published April 2010
DESPERATE HOURS: THE EPIC RESCUE OF THE ANDREA DORIA
The fog-bound collision in the Atlantic that spawned the world’s greatest peacetime rescue at sea.
AMERICA AT D-DAY
A 50th anniversary account of the battle that turned the tide of World War II.